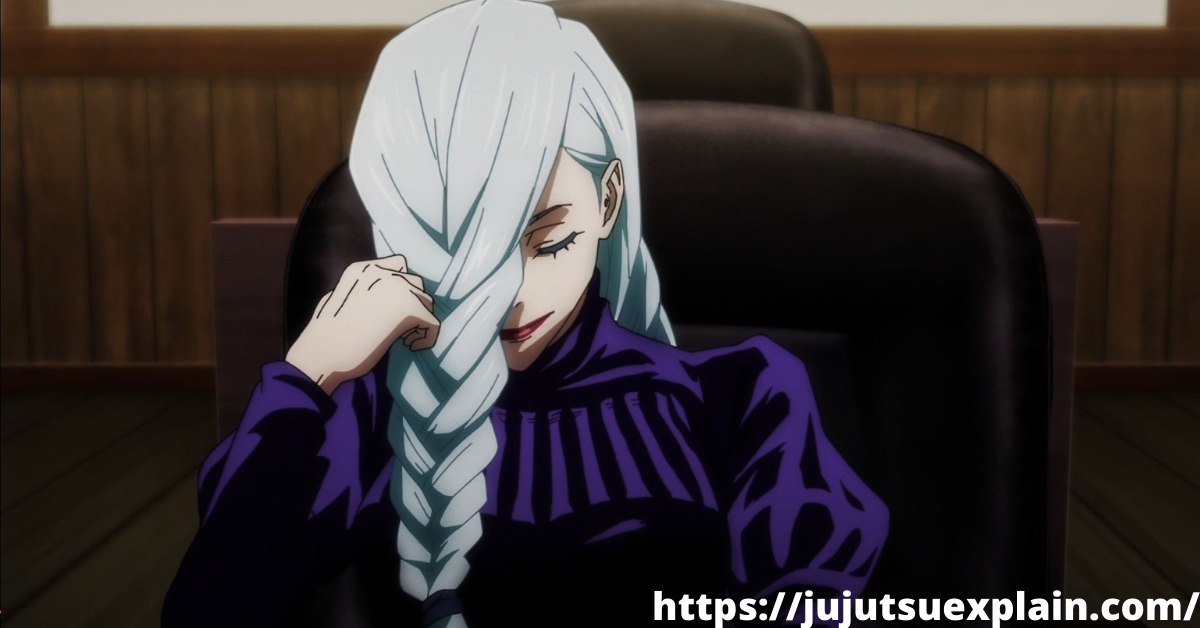 In just only in four years, the Jujutsu kaisen anime series has managed to become one of the most famous shonen series. This is also because of some competent female characters. MAPPA and Sunghoo Park should praise Akutami Gege that he has written such superb female characters.

Mei Mei in Jujutsu Kaisen is surprisingly little known in the anime series. She is counted as one of the unique characters of the series, apart from her love for money but still is a mysterious character as tengen jujutsu kaisen in the current anime series.

What do readers know about mei mei jujutsu kaisen?

She and Ui Ui are siblings. Mei Mei has been the senpai of gojo jujutsu kaisen and  Suguru Geto when they were students at Jujutsu High. Satoru Gojo is only younger than Mei Mei. She is actually 33 years old. Mei Mei did her first debut in episode 17 and it was chapter 40 in which she has first appeared.

She is the supporting character in the series and is of grade 1 jujutsu sorcerer who just works for the sake of money. She is of such a relaxed and calm-minded woman and doesn’t panic in any circumstances. She is so calm to a point of inert.

Mei is also very honest about her greed for money. The only substantial monetary value will interest her to engage in any sort of battle. In fact, She is a Jujutsu Sorcerer because she is paid well. Her allegiance and loyalty to any group she has are for sale. Because she has no concept of familiarity or friendship in her dictionary.

Mei’s colleagues are well aware of this characteristic of hers. I presume this would be the only reason, that Gojo gave huge money to Mei Mei at the end of Jujutsu Kaisen season One, probably she will keep loyal to him.

One rumor is also in the air that Mei Mei loves Gojo Satoru, that’s not true at all. Actually, Satoru is a rich man, and Mei Mei loves money. They both were enrolled in the same college. They have also connected via family lineage i.e kanji for Gojo Satoru means “enligthment” and kanji for Mei is “dark”.

Mei’s DOB hasn’t yet been revealed, but at 173 centimeters tall, she has a respectable height. Her appearance is as unique as her persona, a young woman in light peach skin tone with long blue-tinted silver hair braid into two, one covers her face while the other hangs behind. It is mei mei’s preferred hairstyle while working as a Jujutsu sorcerer.

Black Bird Manipulation is Mei Mei jujutsu kaisen cursed technique. It sounds a relatively simple one. The curse technique allows her to ingrain her curse energy in the crows and control them even from far away. With this, she becomes able to share the crow’s vision. These crows are tougher than the average. This makes her perfect for reconnaissance missions. She can also ingrain her curse energy in various crows in order to gain strength or attack style.

Mei Mei has reached her physical limits and she also possesses high-level curse energy as a Jujutsu Sorcerer. She had trained to manipulate curse energy in her body for over limits. There is no doubt that she is a fighting master that uses skills enhanced with control cursed energy. Additionally, she possesses an innate curse technique that can hold an entire folk of crows for long-range. She is a damn mercenary.