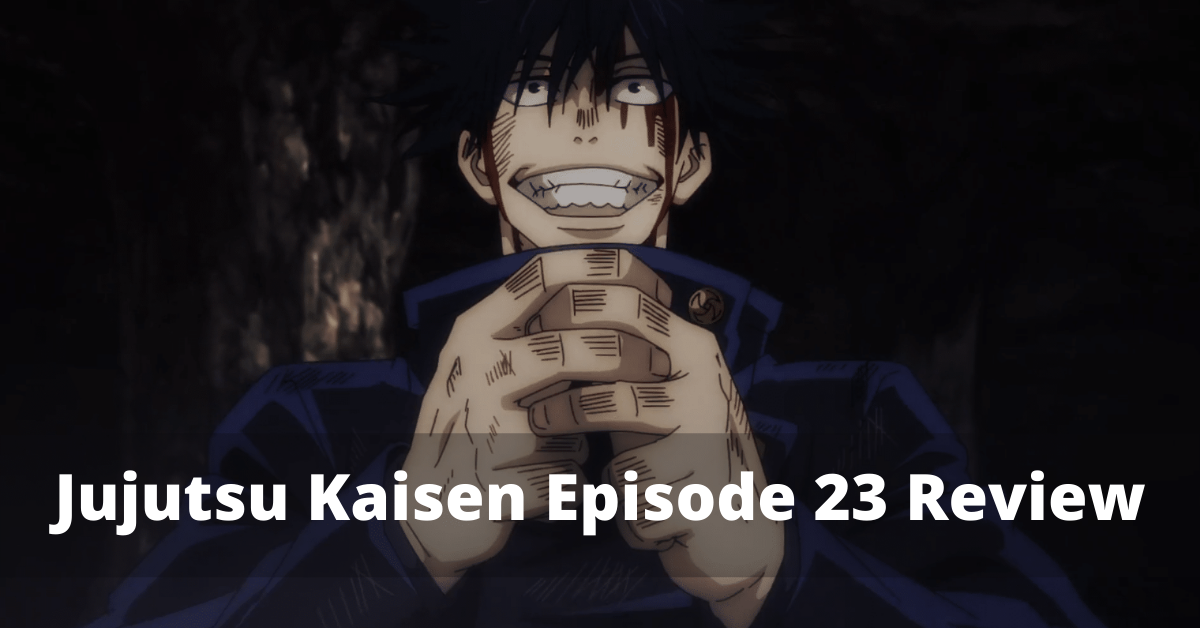 Speaking of another serious episode of this anime jujutsu kaisen episode 23.

I was a bit enthusiastic that I’m again gonna mark out some details about the current episode of Jujujtsu kaisen. This is a reality that the episode itself punched us from the start.

When the first amazing battle happened to be in the series between Jogo and Satoru, I thought that it would be a great way to describe  Jogo as “ Volcano Head” and it precisely pops up in the fight.

However, When it came to jujutsu kaisen episode 23, It reminded me of the Whack-a-Mole, because of the battle of Fushiguro and Nobara with the cursed spirit under the bridge.

Maybe someday Jujutsu Kaisen will give us some sort of unique descriptions so that we could more precisely review the episodes.

Despite the humor, this episode is no joke but a serious one for the anime, and two in a row is unusual for me. In most of the episodes, there’s some kind of humor, but it is absent in this episode most of it! One thing to add, I will not count the “Jujustu Stroll” part after it.

Here is the question “Is jujutsu kaisen episode 23 worth seeing”?

Yes, it is kind of that episode that will not bore ya and will fulfill all requirements of thrill and excitement, what most the folk search for?

The battle here is excellent once again. Two special grade curses are still there to be dealt with. And it going to be more exciting with the tragedy that who will end up with Sukunna’s Finger.

In the episode, it was especially highlighted how much Nobara, Itadori, and Megumi refined as Jujutsu Sorcerers. Fushiguro Megumi became capable to defeat a curse that consumed one of Sukunna’s Finger. Itadori fought with a special grade curse and Nobara she was also going well. She doesn’t even seem out of the point while having a one-on-one fight with a special grade curse.

Fushiguro Megumi was the main focus of the current episode. As his narrative was along with Gojo’s stance that Gojo Satoru is bringing in the strong sorcerers into his team.

How did Fushiguro Megumi seek out to access his power- Jujutsu kaisen episode 23.

Fushiguro kept in mind that Gojo will only add the strong jujutsu sorcerer’s into his circle and he remind himself when he was training with Satoru that he said: “ dying to win and risking death to win are two completely different phrases”. These words of Satoru enable Megumi to tap into his hidden powers that he previously was unaware of.

As in jujutsu kaisen episode 23 unfolds, Megumi gains strength because Jujutsu Kaisen doesn’t want him to be left behind. One thing was that we all know that it was Itadori Yuuji, who was developing fast in his powers, that’s why Jujutsu Kaisen brought Fushigoru Megumi as the supporting protagonist in the second last episode of the anime.

I assume that Nobara would be the next.

Besides, Fushigoru’s physical development there was a notable improvement in his character. We came to know about Megumi’s past that he has a younger sibling Tusimiki Fushigoru, who has been paralyzed after being cursed and Megumi wanted her to get well soon. This was a heart-touching moment but we never know what Megumi is up to. But we can assume that he had become more humanized in jujutsu kaisen episode 23

And now he seems to be more approachable.

I can be certain that I have described some major detail about the episode.

So go now and watch some anime!