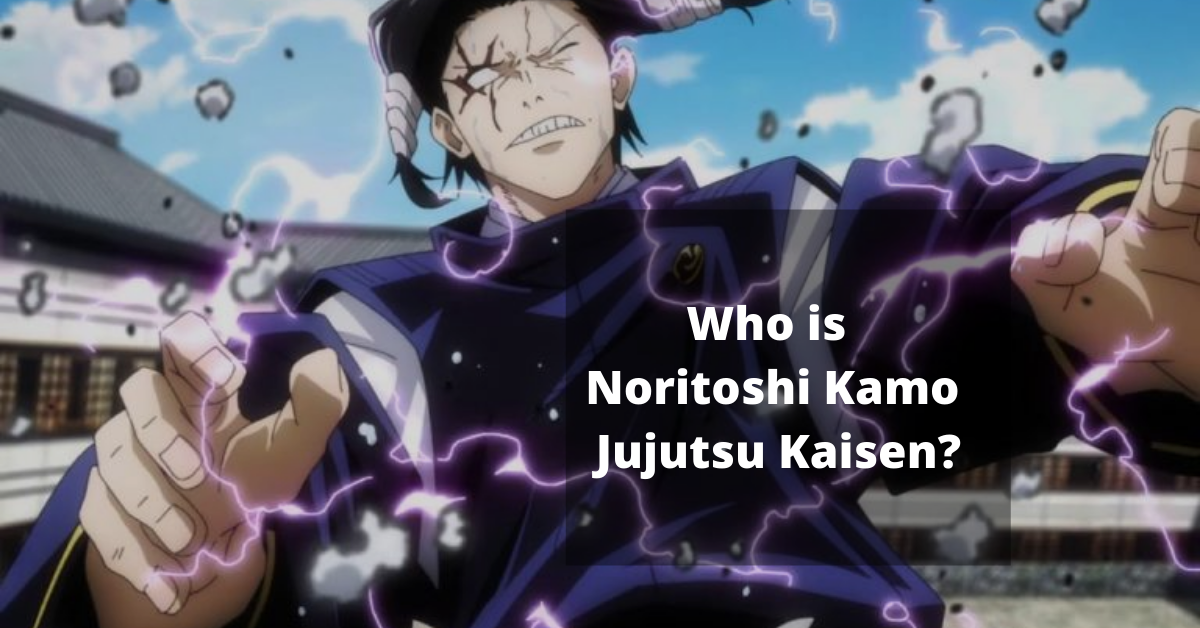 Noritoshi Kamo is one of the main supporting protagonists in the Jujutsu Kaisen anime series.

We first saw him in the Exchange Group of Events in Jujutsu High Tech. He is the senior of his peer at Kyoto School and also belongs to an ancestral Sorcerer family just like Fushigoru Megumi. We have seen him with a calm and impassive personality and also with close eyes, he usually keeps them close.

Why does Noritoshi Kamo always keep his eyes closed?

I don’t know why he does so!

He wears a shozoku version of a jujutsu uniform, a dark one with white socks in zori sandals, and a dark color yukata robe often seems to hang along with Kamo’s uniform.

Kamo jujutsu kaisen keeps Mai-Zenin beneath him because she is not inherited with the Ten Shadow Technique. While her sister Maki-Zenin does have the inherited gift. Kamo empathizes with Megumi but dislikes Itadori Yuji because he feels he is a threat to jujutsu sorcerers and he must be eliminated.

Noritoshi Kamo jujutsu kaisen chose to be a sorcerer because his mother trusted that he has potential. He is from the Kamo family and the rightful wife in the Kamo line didn’t give birth to a son who inherit the special technique of the Kamo line “Blood Manipulation”.  For the sake of his mother, Noritoshi Kamo jujutsu kaisen accepted the responsibility of being the head of the Kamo Family.

(Is kaisen meaning a sorcerer? Yes/No).

When he encounters Itadori Yuuji, it helped reminds him that Yuuji is a sorcerer for a similar reason. But he wishes to meet his mother, once he becomes a great Jujutsu Sorcerer.

When Noritoshi arrived at Tokyo College for the Kyoto Goodwill Event with other students and Kyoto College teachers. He and the others were told that Itadori is alive and will participate in the event.

Afterward, Noritoshi along with Todo Aoi and the other students had a mini pre-kyotoGoodwill Event meeting in the presence of Principal Yoshinobu Gakuganji.

Where Yoshinobu instructs them to kill Sukunna’s Vessel. There Todo was irritated with Gakuganji’s instructions and threatens them all. Noritoshi continue the line and told them to attack Yuji altogether.

Before the beginning of the Goodwillevent, Noritoshi is given a tool by Gakuganji so it would be easy for him to kill Yuji. As the event started, Kyoto students surrounded Yuiji and attacked at once. There Aoi Todo interpreted and saved Itadori Yuiji and from here Jujutsu kaisen episode 17 started.

Noritoshi is a semi-grade jujutsu sorcerer with his inherited Kamo line Technique “Blood Manipulation”. Noritoshi Kamo is a skilled Jujutsu Sorcerer and is respected as a leader among his peers. In the Exchange Group Event, Kamo leads the Kyoto team.

Kamo was quite capable to fight against any rival, as we saw him fight alongside Megumi and Toge when they were engaged with Hanami.

However, eventually, he was defeated but became the key reason to discovering his weakness of Hanami.

Noritoshi Kamo jujutsu kaisen possesses the curse technique of the Kamo’s family “Blood Manipulation”. It grants Noritoshi control of all the properties of his Blood. Staining his arrows with his Blood allows him to control the position of the arrows despite the laws of physics.

This was revealed to Megumi when they both were fighting Goodwill Battle. Not just that, he also possesses several other derived techniques in a wide variety of offensive abilities.

Crimson Binding: It is a blood net that binds the target.

Piercing Blood: This allows to fire a beam of Blood.

Flowing Red Scale: The technique in which body Heomastaisis increases.

Slicing Exorcism: It is a wheel of blood in the shape of a bladed projectile.

Convergence: Through this blood can be condensed and compressed.

But I loved the technique in which  Kamo had full control over the trajectory upon his fired arrows.